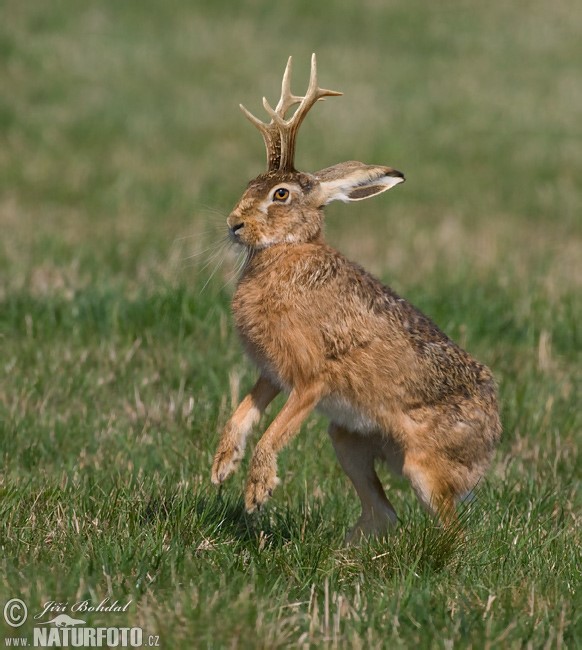 Let the rest of the world take notice. Douglas, Wyoming is the one, true home of the rare, mysterious and elusive fearsome Jackalope, also known as the “warrior or killer rabbit”, as trademarked by the State of Wyoming in 1965 and officially designated by the State in 1985. The jackalope is the result of an auspicious mating of the jackrabbit and a now extinct pygmy deer, initially encountered by John Colter, the first known mountain man to explore the Yellowstone region. Though their range once spread across much of the American West, their only remaining range is in the vast high plains surrounding Douglas. These antlered creatures are otherwise similar in appearance to a jackrabbit, yet capable of speeds up to 90 miles per hour. Their rarity is ensured by the fact that they only breed during lightning flashes. They are known for their other unique characteristics: their fondness for whiskey and their uncanny ability to mimic human sounds. This latter quality is often demonstrated by their mimicking the singing of cowboys around the campfire; and has often aided them in eluding potential captors by calling out “there it goes” to divert them in the wrong direction. Their milk, which is naturally homogenized due to their powerful leaps, is known to have amazing aphrodisiac qualities as well as a wide range of medicinal powers. However, the females can only be milked when lulled into sleeping belly up, generally as a result of a whiskey induced stupor. Fortunately, jackalope milk may be obtained at the Douglas Visitors Center along with hunting licenses. However, those seeking licenses should beware of the difficulty in bagging a jackalope. Besides their innate ability to blend in with their natural surroundings, licenses are only issued to those with a demonstrable I.Q. of less than 72 and are only valid between the hours of midnight and 2:00 A.M. on June 31st of each year.

Those of inferior imagination believe that the Jackalope had its origin in confusion regarding a virus known as Papillomatosis, which may form antler-like tumors on a wild rabbit’s head or body. And it cannot be denied that brothers Ralph and Douglas Herrick did much to popularize the jackalope. In 1934, after returning from a rabbit hunt, a dead rabbit was thrown onto the floor next to a pair of deer antlers and the similarity to the jackalope was immediately noted by the two brothers. They embarked on a thriving business mounting “jackalopes”, a taxidermal combination of a jackrabbit anointed with deer antlers. So well did their product sell around the world, as well as spin off products of postcards, t shirts and such, that Douglas was touting itself as the “Jackalope Capital of the World” by the late 1940’s.

While the traveler is unlikely to have the opportunity to have an actual sighting of the rare and ferocious jackalope, they will witness its strong impact on the community. The jackalope is the prominent feature on the City seal and logo, which testifies that “We know Jack”. The creature can be seen immortalized by statutes in downtown’s Jackalope Square and at the Visitors Center and in a thirteen foot cutout adorning a hillside near the north entrance to the city from Interstate 25. It is a prominent feature of the City entrance signs, the impressive Yellowstone Highway bridge over the North Platte River, and numerous additional elements of the community; and is celebrated during Jackalope Days each June. Its presence in Douglas was even documented in the 2006 film Stagbunny. We embrace the wild and independent nature of the jackalope, and welcome visitors to share in the fun.